Next month will be the four year mark of Shuuhei and I being together. This little fur ball helped me through a lot when we first met. Not long after he came home with me I found out that he liked tea.

Now I know tea may be on the list of things cat’s are not supposed to have, but he snuck some and loved it. 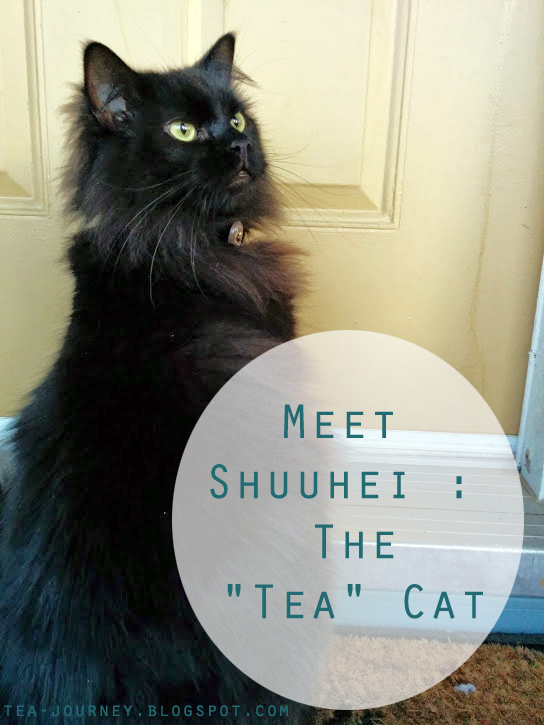 Shuuhei and I met in Toronto in October 2010, at that time he was “nicknamed” Berney by the shelter. Originally in my mind I was going to take home Isis, a one year old black short hair female, but after she tried to escape when I was allowed to holder her. I became unsure.
Shortly after I was introduced to Shuuhei and his sister (who I partly wish I had got her as well). His sister walked to the far end of the cage and little Shuuhei came right to me. After quickly asking permission to pick him up he was nuzzling my face in my arms.
The poor little boy went through a lot there after. There was an electrical fire on the other side of the building (no where near Shuuhei but there was a lot of smoke), he was bumped from one shelter to the next till I was able to find him and bring him home. He had a long visit with my family cat Kiki till I was able to find us both a new home.
At our new home a few months in (April) there was some flooding in my room and my little champion let me know. By jumping on the water then on to my bed where I was sleeping. We sure got that dealt with quickly.
Shuuhei now is currently here with me at my parents home. He is a little shy, so he stays mostly under the dining room table or in the front window. He is being very patient with me as I get things together to move out sometime in the new year.  So for now he is enjoying the smell of tea and the freedom to go outside on the porch (when it is quiet).

Now that you have met Shuuhei, I would love to meet your little loved one! Share links to images and share how you met!