So in the end after much debate I went back to ink, but with better paper. This series is much more enjoyable compared to my past work. With exception of my fetus series and cats cradle. There is something just simple and yet complex to the drawings that come out when I use sumi-e ink and Chinese brushes. Perhaps it is because I had so much “training” in water colour that it just comes naturally now or because of it’s simplicity?
I an currently working on a rough copy for my artist statement, max 100 words or so for the catalog and I think it’s 250 for the final copy. In addition I have to come up with a artist statement of 5 sentences max for my submission for the Retrospective show (due friday by 4pm). Things are slow to fall into place but things are getting there.
On another note I realized I’m near the end and I have done next to nothing for the paper, so I’m getting it going now. I also have a curatorial project to make a power point for (got it going so no big there) and an essay about Simone De Beauvoir for Modernism: Critical perspectives (I have everything I just need to pick out what I will use and start it). Even though there is a lot to do in such a short time I’m thankful that I have at least got things going.

Today I paid to stay for the summer or rather paid for august and I have to pay for the others as it comes up. I applied to jobs to stay, if all goes well I will hear back from someone soon. Well that was just a quick update on things that are going on. Back to writing! ( will post images of what is going on with my work soon

I went home for a while but I’m back to tidy up my apartment and thesis studio. Going to work hard tonight to finish a portrait of my late Grandma for her husband. So far it looks Impressionist so It should turn out well as I know I can do that well. I will post pictures either tomorrow or later to night of it’s progress.
On a side note I am going to work on studies for final works for thesis and do some drawings etc. I might even start the files for my photo series I want to do. Although I am wondering how much it will cost to print when I do it. Size is always an issue for me it seems when talking to peers about my work. I’ll do some research on it and decide it all out before I compile everything together. I’m going to go make some tea and tidy up for dinner/lunch and my painting session 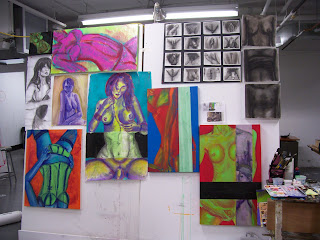 I was told to work on the figure more and to try to put the same “power” from my black-n-white work into my new direction (I worded it nicely though). Too decorative but I need to work with colour harmony and meaning, I doubt I will work with meaning of colours but harmony/theory of colour is a definite.

I quite enjoy this new direction I am persueing, though I need to find new ways of applying the duck-tape or if I should stop useing it or paint on it. Catherine and Danniel said to leave as is, I like it but I guess (from Paul and Michele’s recomendation I should look into meaning of it or find other ways for it to be used) 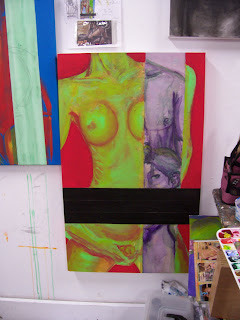 . The work below is the direction I am going to work with for the time being, though I plan to try out other possibilities in the mean time. Things I have in mind range from knitted series of “sculptures” and some photography collection series. I might start this Monday December 7th, I should work really on the projects I have to finish for Advanced Painting. More to come soon. 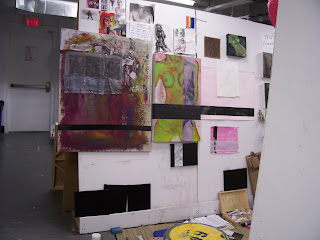 Studio progress/mess images. Working away at various things at the same time, thinking of heading out early to work on a writing assignment due this week and maybe write out more notes for Thesis Report. We will see how this goes.
The piece on the far left is for Advanced Painting, which I’m trying to work with the idea of the Cyborg in Donna Harraway’s Cyborg Manifesto. Still have to come up with a composition for the figure. The piece beside it is putting two different images together, in this pieces’s case it’s a cover of a (I hate the term but,) Shemale pron magazine and a shot from some straight Porn review magazine. Inset duck tape and Voila.
I really adore the duck tape and what it refers to. 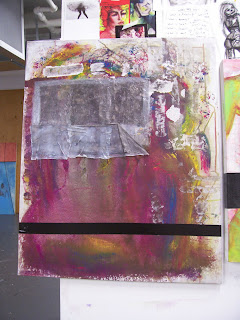 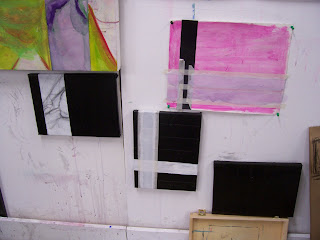 from it to add imagery. Really is open to alot of possibilities for me to work with.
Really anxious to go home, I think I have a cold or something from my unit mates on the north side of the apartment. Going to pack up now I guess and work the whole time tomorrow. Elizabeth get’s back from Montreal tonight at 3am, so we will see how awake I can be for class. Have a good night everyone, wish me well.