Please subscribe, I am going to be doing videos on tea and art to get this YouTube Channel going.

I apologize for the quality I am currently working on ways to improve this for my viewers. 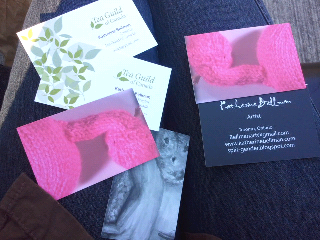 While at Druham Pride I quickly took a picture of these before I forgot. I just adore my Tea Guild of Canada cards I got this week.
I am debateing makeing simple cards for tea related things, that way for Tea Journey I can have the url on them.
Art stores these days sell “trading cards” made of different materials. So I may just get a few packs of watercolour paper ones and make them all by hand. Maybe my chop will apear on them.  I do plan to get a square chop similar to my digital one on my banner.  These characters have “wu wei” and “wabi sabi”, zen and Daoist terms. Wu wei I am always learning new things about. Although what it means to me is to become so proficient in something it comes easy. Practice and more practice. Wabi sabi is to see beauty in imperfection. Something we all should take to heart as nothing is perfect.
I am going to continue to enjoy the Queer Stock show out here in Durham Region. More latter on the “Shen Nong” work!

While looking up more information about “Wu Wei” and it’s association with tea, I came across this video.
As I sipped my Da Hong Pao (Camillia Sinensis- Montreal, review to come) I watched, this short educational video reminded me of my own Tao for tea. I like to relax while I brew, read something Zen or Tao related and listen to the tea. I try out different wares to see their effect on the tea, as that change may in turn change my mood. How we feel while we brew comes out in tea, this I strongly believe in.  Even customers ask me why the matcha/tea I make tastes differently from everyone else  on occasion. This reinforces my belief

Yesterday I got my first tattoos. It’s amazeing how much it reminds you how human you are as it is done. The one line needs to be retouched already but It’s best to wait a while.  I am going to work on a new banner for this blog along side with my girlfriend over at Ruin and Rebirth. Please look forward to the new look of Tea Journey. A special Chinese New Year post is coming up. I’m off to work now, till then, Ja ne.

represents a comprehensive Japanese world view or aesthetic centered on the acceptance of transience. The aesthetic is sometimes described as one of beauty that is “imperfect, impermanent, and incomplete”.[1] It is a concept derived from the Buddhist teaching of the three marks of   existence (三法印 sanbōin?), specifically impermanence (無常 mujō?), the other two being suffering (dukkha) and emptiness or absence of self-nature (sunyata).

Characteristics of the wabi-sabi aesthetic include asymmetry, asperity (roughness or irregularity), simplicity, economy, austerity, modesty, intimacy and appreciation of the ingenuous integrity of natural objects and processes.

a variant and derivatives: traditional Chinese: 無為; simplified Chinese: 无为; pinyin: wú wéi; Japanese: 無為; Korean: 무위;Vietnamese: Vô vi) is an important concept of Taoism (Daoism), that involves knowing when to act and when not to act. Another perspective to this is that “Wu Wei” means natural action – as planets revolve around the sun, they “do” this revolving, but without   “doing” it; or as trees grow, they “do”, but without “doing”. Thus knowing when (and how) to act is not knowledge in the sense that one would think “now” is the right time to do “this“, but rather just doing it, doing the natural thing.

Wu may be translated as not have or without; Wei may be translated as do, act, serve as, govern or effort. The literal meaning of Wu Wei is “without action”, “without effort”, or “without control”, and is often included in the paradox wei wu wei: “action without action” or “effortless doing”. The practice of wu wei and the efficacy of wei wu wei are fundamental tenets in Chinese thought and have been mostly emphasized by the Taoist school. The aim of wu wei is to achieve a state of perfect equilibrium, or alignment with the Tao, and, as a result, obtain an irresistible form of “soft and invisible” power.

There is another less commonly referenced sense of wu wei; “action that does not involve struggle or excessive effort”. In this instance, Wu means “without” and Wei means “effort”. The concept of “effortless action” is a part of Taoist Internal martial arts such as T’ai chi ch’uan, Baguazhang andXing Yi. It follows that Wu wei complies with the main feature and distinguishing characteristic of Taoism, that of being natural. To apply wu wei to any situation is to take natural action.

In Zen Calligraphy, Wu Wei has been represented as a circle Tuesday attached to my pay stub was this letter. It is very kind of the company CEO to write this for all his employees. Being informed of the new addition to the tea wall.
After reading the letter I decided to get a small book to keep with me. In it I am recording notes such as reviews, list of tea to buy, health benefits of herbs, etc. Saturday I am heading over to Tao Tea Leaf for his spring tea tasting. The book will come with me so I can keep tasting notes in order to decide what I am going to purchase.
In addition a few weeks ago I purchased “The Ancient Art of Tea” by Warren Peltier. It compares many classics addressing customs, water, method of heating it etc. Everything right down to company you enjoy a cup with. I am almost done the book and already from the just the first few pages I want to boil my water in a stone kettle the old way. All I have to say is “Wu Wei”. 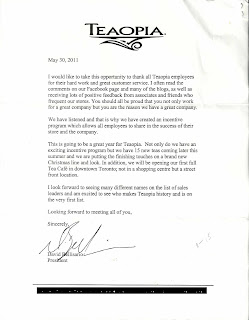